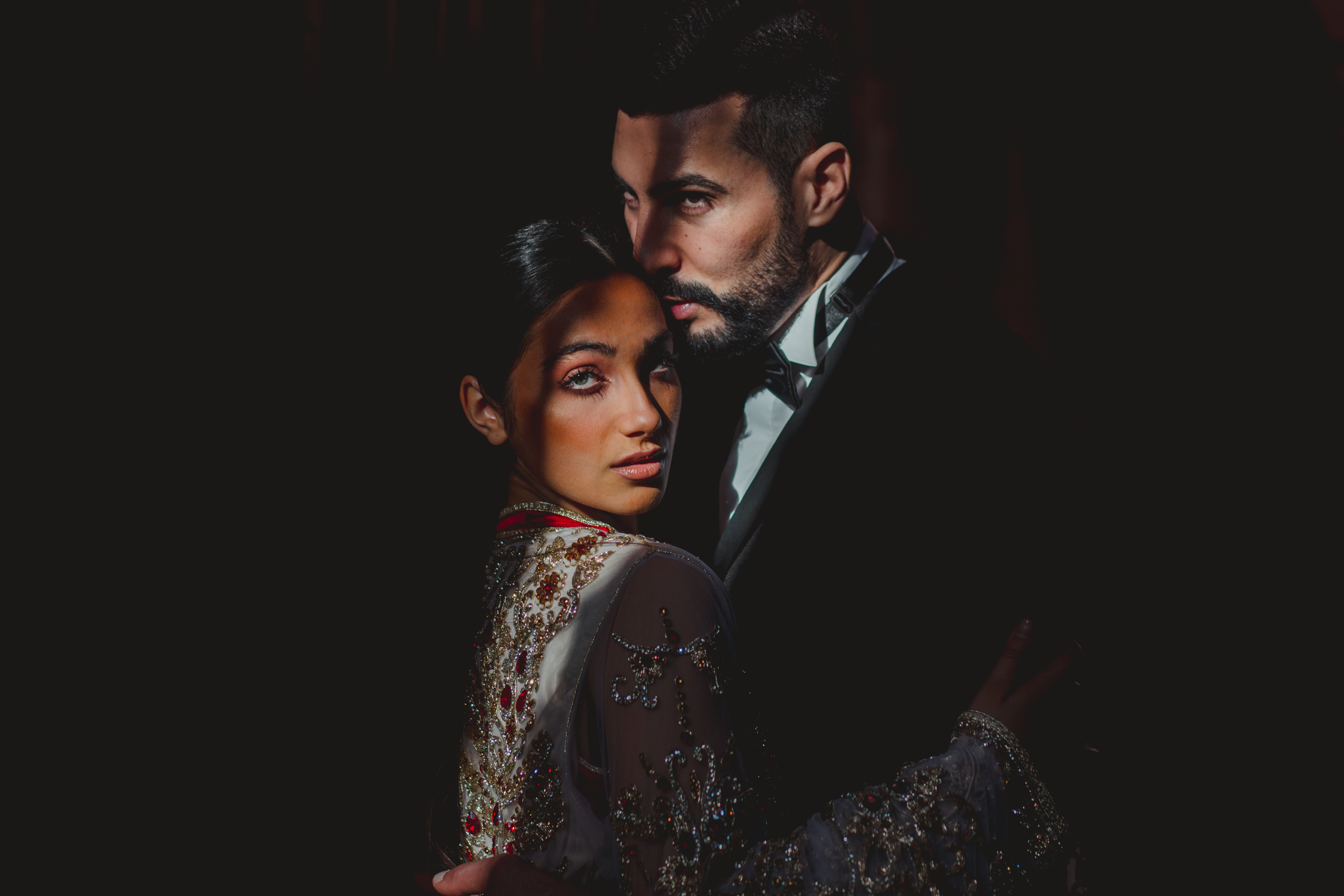 This was a collaboration between Ireland based destination wedding Photographers, Myself, and Frain Photo www.frainphoto.com. Check out David’s blog for his shots from the shoot.

Waking in the Medina of Marrakesh in Morocco to the loudspeakers and the call of prayer was a first for us. The day began with fresh eggs and coffee, before we adventured out onto our Riad rooftop to be greeted by a Moroccan sunrise, views down onto an ancient derelict theater, local cats, a rooster crowing, a few chickens beside the rooster, and the stunning twosome Esther and Ben, looking like something out of a fairy tale.

Esther, who had her make-up done by Marrakesh based MUA @leann Knowldon wore a gloriously handcrafted traditional style Caftan Moroccan Wedding dress that weighed over 50 pounds. It’s designed by @caftandumaroc. The dress was made from extremely heavy material to hold it’s intricately beaded patterns. It finished with a long train, a matching belt clinching her waist, and the softest silk on the inside.

We spent the Sunrise golden hour walking around the centre of Marrakech which made for some outstanding portraits. There were quite a few curious locals, a donkey and cart, fresh fruit and produce stalls making their morning appearance, dust floating in the air, and even more cats.

Esther’s idea to wear a few different bridal dresses thought their day, was exciting for us photographers. Accompanying her 3 traditional Moroccan style dresses, Esther also was delighted with the opportunity to wear a beautiful, handcrafted boho-chic style look by accomplished Irish designer Jill De Burka, who’s previously designed for the likes of Bono from U2, among others, and created many breathtaking successful collections.

You can’t have a meaningful stay in Morocco and not visit one of the many amazing deserts. We were delighted that Esther and Ben had the same thoughts as we headed out to Agafey. Changing into her gorgeous Jill De Burka look for the occasion, we spent the evening at the Agafay Luxury Desert Camp. Set in an amazing landscape of rolling desert hills with luxury tents perched on clifftops, the camp had the biggest bugs we’ve ever seen, the friendliest camels, an outside pool and many a serving of Maghrebi mint tea.

Esther and Ben were enthusiastic about time with the camels which was great to experience. We worked from the ground, but also photographed while riding our own camels, which made for some humorous video.
We checked into a luxury tent for some evening Maghrebi mint tea, and took some time for some additional final evening portraits under the pink and light blue Moroccan sunset sky.

Esther glowed in her third and final traditional style dress, which complimented the views perfectly.

We ended the night with breathtaking fire lanterns lighting our walk back to the main camp, before delighting in some very tasty traditional Moroccan tagine for good measure.

It was a delight to document this day, and we’d like to give a big thanks to Esther, Ben, Leanne, Jill De Burka and Caftan Du Maroc.